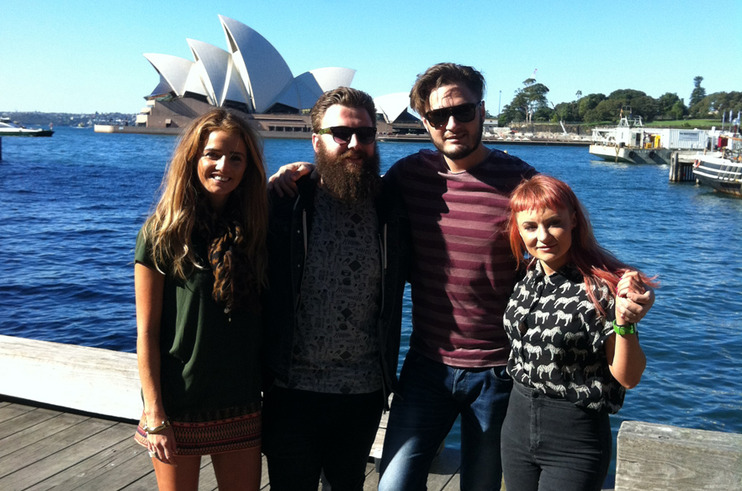 "For the last six months there’s been a large part of my diary blocked for a very special and important event for the F.A.M.E. Team...we were off to the Australia Hair Expo. The British F.A.M.E. Team have not been out to Australia for two years, but were kindly invited this year and we really were back with a vengeance! This year’s trip had been organised by the Fellowship and our Team Manager, Bruno Marc, but it was also very kindly supported by both ghd and ghd Australia; the team are incredibly thankful for the help.

We arrived in Sydney airport after a long 26-hour flight via Abu Dhabi to a fanfare welcome from Bruno, Andreas Stavrou and Errol Douglas who were all throwing white confetti, holding a massive Union Jack/F.A.M.E. Team banner, balloons and chanting “FAME TEAM UK! FAME TEAM UK!” across the airport. We felt like proper rock stars (even if they were Disney balloons...).

After settling in at the hotel, all fed and watered, we spent the next day casting models for the forthcoming shows at the Expo. The casting was held at the the Wildlife Salon (thanks to the salon’s owners Jane and Garry Wild for their help and kind welcome), a beautiful salon set right on the Sydney Harbour overlooking the iconic Harbour bridge. I was looking to cast a model with long hair to showcase my dressing skills, but it was also important for me to find a great short haired model so that I was able to demonstrate my cutting techniques.

Two days of prepping at the Wella Academy and it was suddenly time for the Expo - it was great to get the chance to showcase the best of British hairdressing. The welcome that the team received from the audience was fantastic, I really can’t thank ghd Australia enough for their support. We spent three days demonstrating our looks on the ghd stage, main stage and seminar rooms, where the audience were able to see the team's work up close in an intimate environment. I really enjoyed working in the seminar rooms as that I was able to show the audience some intricate cutting techniques.

The days at the Expo flew by and the feedback we have already received has been great. We hope that everyone enjoyed our looks and managed to take something away - but we also hope that we’ve done the UK proud by flying the flag for British Hairdressing out in Sydney!"