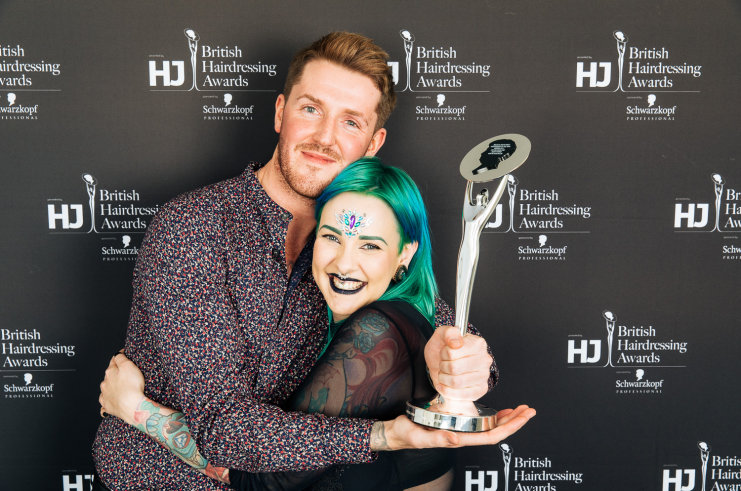 How proud are we - our Cardiff salon has been named the best hairdressers in Wales and the South West for the fifth time! This year’s winning collection came from Art Director Zoe Williams & Salon Director Scott Evans, who said: “To win this award is incredible and we can’t believe it! A massive, massive thanks to Ken Picton for believing in us and giving us this opportunity. We love you!”

The team landed the Wales & South West Hairdresser of the Year award last night at a star-studded ceremony at London’s Grosvenor House, hosted by Cat Deeley, alongside HJ’s executive director, Jayne Lewis-Orr. More than 1,500 of the top hairdressing talent from across the country attended the awards, which is a celebration of the most creative and technically-gifted hairstylists in Britain.

Zoe and Scott follow in the footsteps of Ken who has previously won this award 3 times before becoming the first and only Welshman to be inducted into the Hall of Fame for 3 category wins.

Zoe says, “There have already been so many high points in my career so far at Ken Picton, but winning this is a dream come true! I’m very proud of the work we’ve produced and so happy to be representing our region.” Scott says, “A British Hairdressing Award is something I’ve had my eye on and worked towards for a long time so I’m so happy to have won.”

Each entrant must submit a series of images demonstrating not only their technical dexterity, but their creative vision and comprehension of current trends. Looks must be wearable and beautiful, as well as pushing the boundaries and limitations of hairdressing to showcase the pinnacle of a hairstylist’s creativity. Finalists are then judged, twice, by a panel consisting of hairdressing legends, leading national beauty press and past winners of the awards who have since joined the British Hairdressing Awards Hall of Fame.

Book in with Zoe or Scott now to experience the best hairdressing in Wales for yourself...