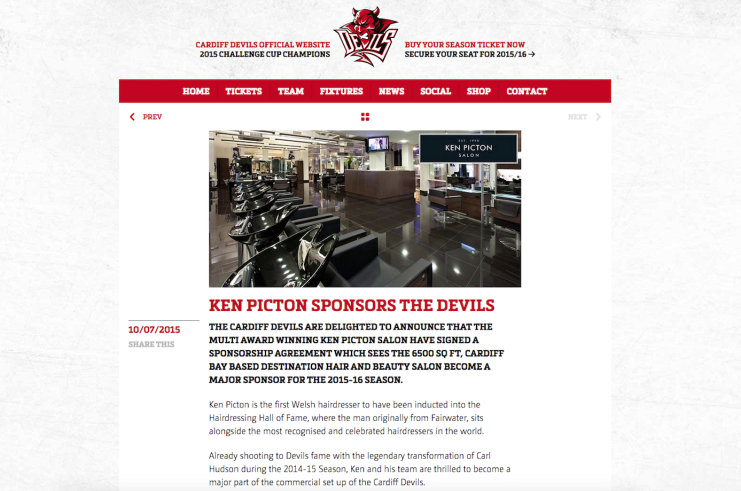 We are delighted to announce that Ken Picton Salon have signed a sponsorship agreement which sees the Cardiff Bay based destination hair and beauty salon become a principle sponsor for the 2015-16 season.

Ken Picton Salon will proudly see our logo on the back of all the Cardiff Devils shirts for this season.

Already shooting to Devils fame with the legendary transformation of Carl Hudson during the 2014-15 Season, Ken and his team are thrilled to become a major part of the commercial set up of the Cardiff Devils.

"The Devils just seem to get it," explained Ken.

"Last season was the first time I had been to watch them play and I was instantly hooked!"

I soon started chatting to Kris and Todd to see how I could come on board and the ideas that were thrown to me were exactly what I wanted and more importantly fitted into both my brand, and the values of what we as a salon offer. I am very excited for the season to get underway."

Kris Agland, commercial director of the Devils also is delighted to welcome Ken on board.

"Having a brand like Ken Picton Salon on board shows exactly how far as a club we have come in such a short time. Ken’s salon is renowned as not only the best in Cardiff, but the best in the UK (officially being named UK Salon of the year). As a club we want to be the best both on and off the Ice and partnering with class leading brands certainly helps us achieve that goal."

The Ken Picton Salon logo will sit proudly on the Devils Jersey alongside our other principal sponsors. As the season progresses, we will announce additional pieces of the Ken Picton Salon sponsorship agreement that will certainly have our female fans excited.

Once again we would like to take this opportunity to officially welcome Ken Picton Salon as a major sponsor for the 2015-16 season and we look forward to what promises to be an exciting and long lasting relationship.