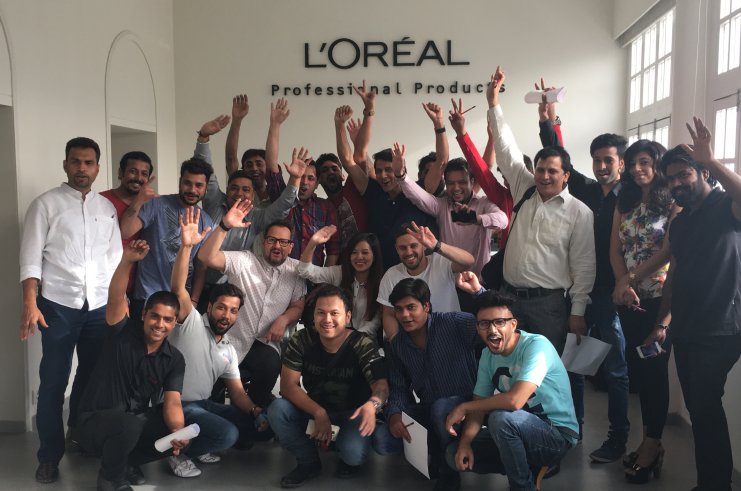 Ken, along with our Colour director and Ken's Art Team member Paul Dennison, recently travelled to India to deliver four masterclasses and one 'look and learn' seminar in Delhi and Bangalore. Following their recent return from Chile and Peru, Ken and Paul have just spent a week in the beautiful Delhi and Bangalore, further increasing their cut & colour fanbase. The trip started the usual way, with Ken attending to clients until 3pm on the day of departure - he's never the one to waste time! After a 10hr flight to Dehli, the duo began their busy week with a day of leisure, experiencing the local cuisine and testing the pool. On the road to the Loreal academy early next day, a slight detour let them see a bit of the Dehli architecture: the parliament buildings, president's house and the India gate, along with the constant hooting of horns. And crazy driving. And millions of yellowed green tuck tucks. Ken quotes their driver: “to drive in Delhi, you need good horn, good brakes and GOODLUCK!“.

Busy with preperation of their models in time for the morning demo’s of Cut and Colour, followed by an afternoon spent with workshopping all the participants, meant they both weren't finished until 7.30pm. This called for a trip back and some famous buttered chicken for dinner.

Picked up as normal the following day, Ken and Paul headed for day 2 of the masterclass. After a demo in the morning and a workshop in the afternoon, finishing at 7:30pm once again, they headed back to the hotel for some food and wine.

Back at the academy the next morning, they were casting models for a look and learn. This involved demo’s all day, with the participants just observing. Having managed to down their tools on time at 5.30pm for a quick trip to the airport where their plane to bangalore was waiting, the duo arrived at yet another hotel at 2am. Day 6 - up and early for breakfast with the birthday boy, Paul! Traransport took them straight to the bangalore academy for their next masterclass, which overlooked a racecourse. High in hopes that they could see some horseracing, they were sad to hear that it was scheduled for the day they were due to leave...

Castings took place in the morning with a workshop in the afternoon, followed by  a group birthday song for Paul and the Indian Loreal tradition of rubbing cake all over his face.

A nice and early start on their last day of masterclasses, with demo’s in the morning and workshops in the afternoon. Having managed to finish at 7pm, Ken took advantage of the opportunity and treated himself to a quick body massage. Back to the hotel for dinner, it was time for some packing and rest ready for their 2.30 am wakeup call for a 3am taxi to the airport and a long flight home to Cardiff.

Having arrived the next day in the afternoon, they treated themselves to some rest before heading straight back to work the following day.