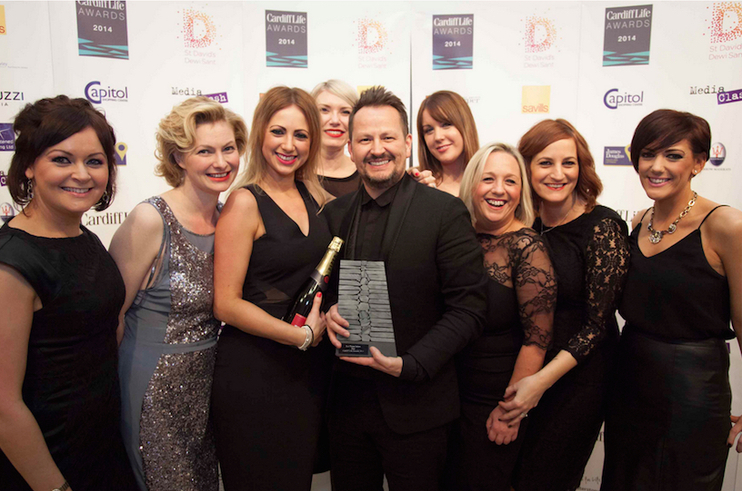 Ken Picton is celebrating this week after winning the Hair category at the Cardiff Life Awards held at Cardiff City Hall. The awards celebrate the best independent businesses in the city and reward the success of hard-working
teams and individuals from theatres to gastropubs and everything in between.
The salon has also reached the Regional Finals of the L’Oreal Professionnel Colour Trophy with the team led by Stylist Kelly Hooper.
The awards rounded off a busy week for Ken, recently announced as ghd’s new Education Ambassador alongside Sam McKnight and Zoe Irwin: he’s one of the four world renowned judges (joining Charles Worthington, Sally Brooks and Chris Williams) to have judged the photographic round of the Colour Trophy and Men’s Trophy entries and will also judge the live regional heats in April. Meanwhile colourist Paul Dennison took on the Young Colourist judging duties.
Ken also appeared at a Shu Uemura business seminar for the cream of the Scottish hairdressing industry to give a talk on prestige branding; Ken represented the hair industry in his talk where he was joined by an Yves Saint Laurent ambassador to talk about their take on luxury whilst the manager of the Gleneagles Hotel spoke about customer service.
Next on the calendar will be Pro Hair Live where he will be working on both the business and creative stages. Ken has also been sharing his top styling tips and predictions for 2014 this month with the likes of Red, The Daily
Mirror, Best and Shortlist amongst others.