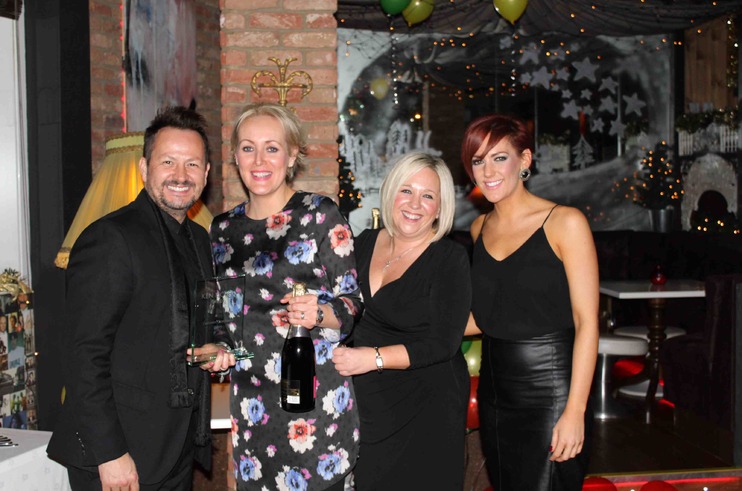 After a year of scooping some of the industry’s top accolades (including British Hairdressing Awards’ Wales & South West Hairdresser of the Year for the fourth year, a Hall of fame award for Ken – the first Welshman to enter he Hall of Fame, L’Oreal Colour Trophy Regional winners, and Fame team and ghd art team membership for Dafydd) this week saw the Ken Picton Salon host their own annual awards, rewarding team members for their hard work. Salon managers Natalie Hinton and Cath Coakley joined Ken to present the awards at the champagne bash. As 2015 will see the salon’s 25th anniversary next year will see a huge celebration to mark this milestone. The salon is a large local employer with a team of 50 staff.
The worthy winners were:
Lara Champion - Customer Care Award.
“Customer Care is such an important factor in what we do and who we are; Lara Champion, our resident make-up artist demonstrated that it’s not just hairdressing that delivers excellent customer care.” Natalie Hinton

“I was completely surprised and the thrilled to win this award. I feel very privileged to work with an amazing team and salon that always deliver the very best in customer care.” Lara Champion

Rachelle Simmonds – Employee of the Year
As well as winning the BHA for Wales & South West Hairdresser of the Year, Rachelle has proved herself a valuable member of staff both in and out of the salon, appearing on stage alongside Ken.

“I was completely taken aback when Ken called my name – what a great year 2013 has been, winning the BHA in November and now being the employee of the year; to be recognised and rewarded for my work is fantastic!” Rachelle Simmonds

Nicole White – 3 trainers and 3 managers using a point system choose Assistant of the Year: the assistant is scored on their work on the salon floor, enthusiasm, passion and attendance. “I was honoured to receive assistant of the year, it came as such a shock! This award is my greatest achievement to date – I hope that’s just the beginning!” Nicole White

Ashley Bryn Jones – Christmas Cracker Award. This is the award for the salon favourite of the year, awarding someone who’s excelled, or is an unsung hero. It recognizes someone who’s worked hard and put a lot of effort and energy in, and as it brings Ken’s approval for the coming year it’s the most coveted award of the night!
“I was so shocked when Ken announced that I was the Christmas Cracker having only been with the salon a short time. It was a really proud moment and I’m really looking forward to what 2014 has to offer.” Ashley Bryn Jones

Sally Edwards – The evening also celebrated Sally’s retirement - the longest-serving team member is leaving after 20 years at the salon to spend more time with her 5 boys aged between 2 and 17. Ken gave Sally a special gift of slippers and lambrini to ease her into retirement, football cards for her boys, and gift vouchers as a thank you for her work at the salon.
“Working at the salon for 20 years has been fantastic – making the decision to hang up my apron was a difficult one. I have loved every second of being part of such an amazing team. Thank you to Ken and all the team for a fabulous send off!” Sally Edwards.